To start getting ready for Sarah’s wedding, Priscilla had to take a shower in an unfamiliar bathroom. The tub was narrow and sloping, with high sides to climb over. But thanks to the stool and extra handles we’d brought along, she was able to shower safely. Even so, getting dressed for the wedding was so complicated and time-consuming that the two wedding-party spouses who’d agreed to stay behind to help her down the stairs knocked anxiously on our door to make sure we knew what time it was. We did. That wasn’t the problem.

When we finally emerged they took her right downstairs and immediately sped off to the venue. We followed at a slower pace, bringing Sarah’s grandparents with us.  About ten minutes from home, we realized that in the rush to get going, we’d left the garage door open. (We’d been given custody of the remote as the last to leave.) If we returned to close it, we’d miss much of the wedding, late as we were already.

The four of us deliberated and Priscilla finally declared, “God has everything under control.” We resolved to go and enjoy the wedding, trusting that the house would be safe for a short while. Sarah’s uncle was to return there between the ceremony and reception to get the cake, since the venue, hosting multiple weddings that day, couldn’t accommodate it before then. We’d give him the remote and he could close the garage door.

When we arrived at the venue, we were welcomed by none other than the two who had helped Priscilla down the stairs. No wonder they’d been in such a hurry to leave—they were the greeters! The wedding coordinator took Priscilla away in her wheelchair while I parked the car. I followed signs to the “Wedding Garden” and reunited with her. The seating area looked full and we took places at the back. But Sarah’s brother, in groomsman attire, came up and told us that the family row on the bride’s side still had room; would we like to sit with the parents and grandparents? We’d be delighted. In keeping with proper wedding etiquette, I let him escort Priscilla while I walked respectfully behind. In this case, he pushed her in her wheelchair. Hmmm, she used to push him in a stroller, and now . . .

Priscilla wore a long dark-red satin skirt with matching wide scarf. She’d forgotten she had these and only rediscovered them the night before we left. It turned out that the mothers of the bride and groom had consulted and agreed to wear “long” themselves, so she fit right in. “You look great!” a guest on her way to the next wedding exclaimed when she passed Priscilla in the hotel hallway. What to wear to a wedding in a wheelchair had been the subject of much anguished deliberation for her, but the last-minute discovery had solved the problem. 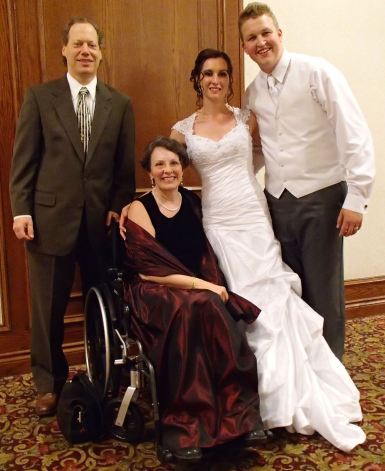 The ceremony itself was beautiful. Bryan and Sarah’s deep faith shone through all the details. We were so grateful we’d been able to attend. Afterwards the newly married couple led everyone out into the garden to visit. But within only a few minutes, we started feeling raindrops. Knowing we couldn’t wait until it really started to rain, I hustled Priscilla along the winding paths back to the hotel. The next wedding had been scheduled in the garden a hour after Sarah’s, but it had to be moved indoors because it was raining steadily by then.

The uncle who’d gone back for the cake told us at the reception that if we hadn’t left the garage door open, he wouldn’t have been able to get into the house, because no one had given him a key.  Apparently everyone who did have a key thought someone else was going to give him one, and when no one did, he thought he wouldn’t need one.

We had a wonderful time visiting with family members, and with friends old and new, at the reception. The speeches and presentations that followed the meal were very meaningful, but they went an hour longer than planned, so that it was 10:00 by the time Bryan and Sarah arose for their first dance. Given our new reality, this unfortunately had to be our cue to leave. Sarah’s grandparents were also ready to go by then, so we took them home with us.

But how would Priscilla get back up the stairs? The father of the bride kindly offered to come help, but the round trip to the house would take an hour or more, and we couldn’t take him away from his daughter’s wedding reception for that long. So we insisted we could manage. The plan we adopted was for Priscilla to hold onto each of the railings (mercifully the stairs were narrow enough for her to grab both at once) and for me to pick up her feet one after another, from behind, and move them up the steps while she shifted her weight forward to adjust.

This almost worked. The problem was, we ran out of railing two steps short of the top. While we were debating what to do next, Priscilla’s legs collapsed beneath her and she came down heavily on the main floor, on the edge of the stairs. But Sarah’s grandmother was a nurse, and she’d been trained how to lift fallen patients off the floor. She and her husband had already gone up the stairs ahead of us with Priscilla’s wheelchair. So we were able to lift her up by holding her under the arms and place her in the chair.

It was after midnight by the time we finally got to sleep, but we whispered to each other as the lights were going out, “We did it!” We’d been able to come to Ontario for Sarah’s wedding, and Priscilla had made her bouquets.

One thought on “An October Wedding, Part 2”

Audio versions of each post are provided for the sake of those who, for many potential reasons, may not be able read from a computer or other device. Priscilla was no longer able to do this in the late stages of her disease, but she still listened eagerly to audio resources.
%d bloggers like this: