When our nurse practitioner told us that because she wasn’t yet hospice-certified, her supervisor didn’t want her to manage Priscilla’s “end of life” care, this made me curious about exactly what that involved for an ALS patient. A search online turned up a very helpful article by Dr. Nigel Sykes, medical director of St. Christopher’s Hospice in London, appropriately entitled “End-of-life Care in ALS.”

Dr. Sykes explained that “most people with ALS die of respiratory failure” (meaning breathing weakness so severe that the body becomes unable to replace carbon dioxide with fresh oxygen in the bloodstream) and that “consequently, the trajectory of decline in respiratory function is the key to anticipating the final stage of the illness.” He warned that “the onset of this stage . . . is often rapid and ALS is a cause of sudden death.” One retrospective study of ALS patients showed that nearly 60% of them had died “within 24 hours of a change in their condition first being noted.” As a result, “the caring team” must prepare patients’ families for “what may appear to be a catastrophically sudden demise.” “All right,” I told myself, “now I know what to watch for, and I’ll need to be mentally and emotionally prepared for the end to come fast.”

In Priscilla’s case, a “change in the patient’s condition” was first noted in July 2015. She then did die of respiratory failure, but not within the next 24 hours. It took six months.

At first she was short of breath for certain periods during the day, but soon this was the case all the time and she needed to recline back in her wheelchair to keep the weight of her ribs off her lungs in order to breathe. When her nurse practitioner came for her next visit, she noticed the change immediately. “Are you experiencing shortness of breath?” she asked.  “Yes,” Priscilla replied, “but not to the extent that I want to go into hospice.” She was determined to stay at home for as long as possible, and the nurse practitioner was kindly willing to abide by her wishes and not force the matter.  As dire as this was, it  wasn’t quite “air panic.”

Still, Priscilla would spend all day just trying to catch her breath. It required 20 or more gasps to get that “caught up” feeling, and she would soon run out of breath again. Imagine running as fast as you can for as long as you can, pushing to the limits of your lung capacity until you collapse on the ground, gasping for breath. That’s how short of breath Priscilla felt all the time. 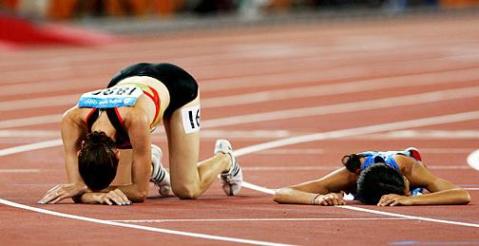 Yet still she hung on to life.  These were horrible days. I can’t put it any other way. Yet God’s mercies to us continued.  In fact, some of the most direct assurances we had of God’s continuing love and presence came during this most desperate part of our journey.

Friends who lived in other parts of the world started appearing in my dreams at night, right around the time when they would be getting up and remembering us in their morning prayers.  Friends in the United States and Canada showed up in my dreams, too, and these were people who’d told us that they prayed for us in the night if they ever woke up. Some of them reported waking up regularly at specific times, such as 3:00 a.m.  I believe God was reassuring me by showing me in my dreams that He had us covered by prayer around the clock.

One night in a dream I visited with another friend who was already in heaven. I’d known him on earth as a godly older gentleman.  It eventually dawned on me that he’d been a widower, so he knew just what I was going through. I truly believe that God gave him a special assignment to pray for me in those days, because he could do so with compassionate understanding. These dreams encouraged me to recognize that praying friends on earth surrounded us in this deep trial with their love and care, remembering us continually before God along with a throng of those who were already in God’s presence.  This awareness gave us the strength and hope we needed to carry on.

Priscilla knew she was actively dying. She’d heard of other Christians, in their final days, getting encouraging visitations from departed loved ones, or from heavenly beings. But nothing of the kind had been happening for her. “Where are the saints and angels?” she asked, expectations disappointed. “Where’s Jesus by the bedside?”

Her gasping for breath, amplified by the VPAP, became so loud that it began to keep me awake at night. I moved, very reluctantly, down the hall to sleep in the hospital bed, just so that I’d have enough energy to make it through the next day. But my ears were attuned to the sound of her voice, so that in my sleep I could still hear her call me, even faintly with a breathing mask over her face, whenever she needed help.

One night she called me in to restore the seal of the mask, which had started noisily leaking pressurized air. After I fixed it, she told me, “I liked what you did when you came in before, how you put your hand on mine and left it there till I fell back to sleep.” “This is the first time I’ve been in tonight,” I responded. “No,” she insisted, “you were here before. I liked it so much that I even took the mask off to call you back, but you didn’t hear me.”

“How did you do that?” I asked, since she no longer had the use of her hands. “Oh,” she said. “Then maybe it was a dream.” But then she thought about it some more.  “No,” she insisted, “it couldn’t have been a dream. It was too vivid, too real. I could feel the pressure on my hand.”

Audio versions of each post are provided for the sake of those who, for many potential reasons, may not be able read from a computer or other device. Priscilla was no longer able to do this in the late stages of her disease, but she still listened eagerly to audio resources.
Loading Comments...
%d bloggers like this: